So here’s the setup… today’s Daily Shoot challenge was to capture a silhouette of some sort.  My plan from the warm confines of my living room this afternoon? =>  Turn it around a bit.  Grab that copper likeness of the sun from a nearby wall, take it to the river with me and my little girl, and have her hold it out at arm’s length, directly in front of the sun… thereby creating a silhouette of the sun… by the sun.

I’m here to tell you that it didn’t work out as smoothly as I had thought it might.  My near-three-year old quickly found the “sun” too heavy to hold in such a way.  “It’s too heavy daddy.”  Well, of course I wasn’t disappointed in the least, but since I got her all fired up for the shot on the drive down to the snowy shore of the Missouri River…  she certainly was. 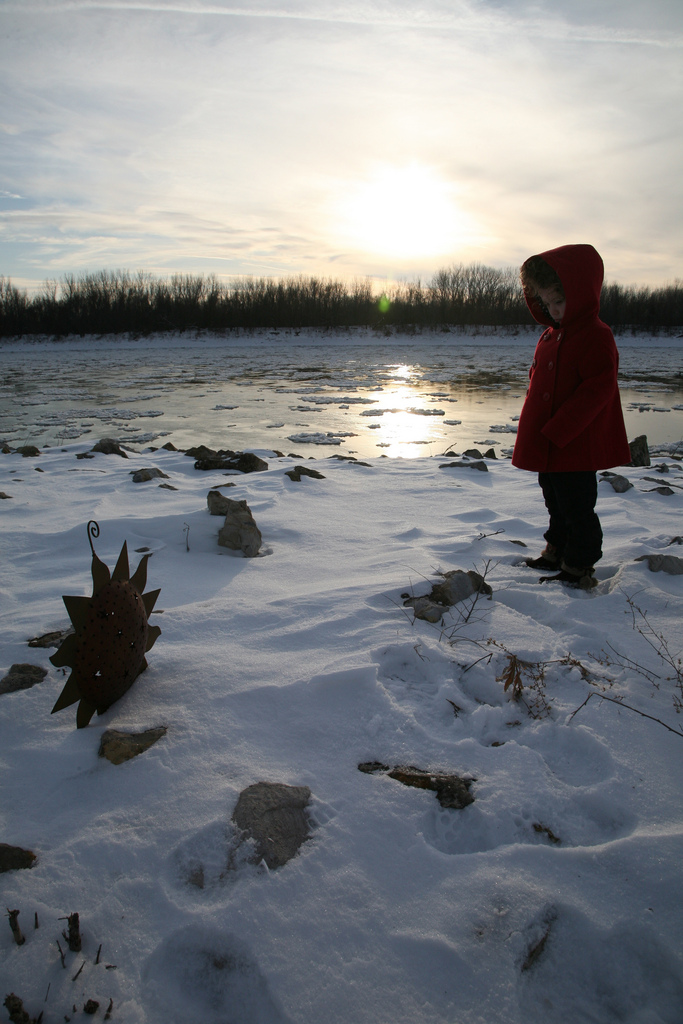 So I stepped back, stuck the sun into the snow, and snapped off a shot to remind us of the attempt.   Even though I didn’t take the time to adjust the setup (and so you see the sun “blown out” and over-exposed), I really did capture a moment in time.   After scooping her up and telling her how she is the most precious thing to me-  followed by some intense tickling, we climbed inside the toasty car.

The bottom line:  she’s a bit too much like me at the core.  I’m glad I know that while she’s only two years old.  It took me a long time to make friends with failure.  I’m comforted that she has parents who are now quite fond of the messiness of learning.  Being the first-born daughter of two first-born parents might just otherwise carry some potential stress, if you subscribe to that sort of thing. 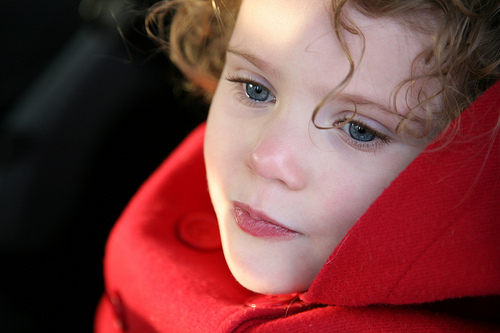 Education is life, is…

So in typing an outline of this little story into Flickr, where I am ten days into my first image-a-day “Project 365,” it hit me how close this comes to the classroom at times.  You see, I knew exactly what I wanted out of that shot.  I have stood behind an SLR with an excited neuron enough times to know what I can and cannot do at this point.  And right here is the rub.  How many times have you envisioned a classroom task where the student work failed miserably to meet your expectations?

I don’t think I have to say “if so” here, do I?  We’ve all been there.  My question is…  what did you do about it?  Hopefully, you finally got around to looking inward at your own expectations, approaches, and scaffolding.  We all jump too fast along the continuum of gradual release from time to time.  It’s hard to slip your brain inside those of a hundred others to see what the best “next step” is every time.  And if you’re an innovator?  Well, if you’re prone to innovation, you often swim in unfamiliar waters… continually using your teacher senses to lead your students through the rip-currents of failure.

Jumping too early and expecting more autonomy than is warranted at a given moment in the educational spectrum is commonplace.  What I would suggest isn’t so routine is tapping on the brakes for a moment, stopping the classroom bus and saying:  “hold on a sec…  I took something for granted…  let’s go back and try it this way.” It is far easier to push the blame onto our students.  We get into that, “well when are they going to learn responsibility and independence?” …sort of thing.  I’m certainly not saying that students can’t be lazy from time to time.  I could write the book on that.  Yet, I would suggest that our teacher energy is best channeled into what we can realistically control.  The only things we can 100% control within the classroom on a daily basis are the choices we make. 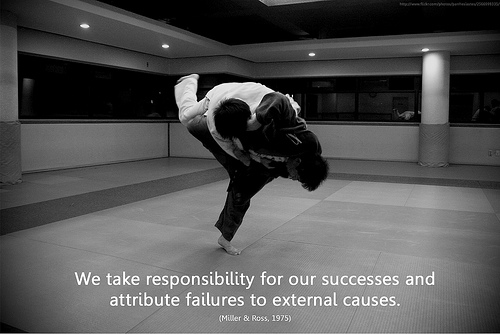 I think we need to create little microcosms where failure is frequent.  Not because failing is magical, but because stopping short leaves potential learning on the table.  I advocate the creation of zones where we actively engage failure as some sort of pushing-back-against-boundaries sort of thing.  Our classrooms can be this.  Allowing  -even pushing kids-  to “safe” failures teaches us all something about what we can and cannot do any any given point in time.  We have to get to the point where that isn’t scary.  Especially for our most talented children.  If you are so accustomed to winning, and have forgotten feels like to fail, after a while you teach yourself to avoid it at all costs. Our kids suck a bit of water up their noses while learning to swim, right?  In our protective arms, this sort of failure builds confidence.  Should it really be that different in the classroom?

Prevent the big fail.  Rub elbows with your students.  Sit side by side with them as they work and watch them interact with…  whatever it is you’re asking them to interact with.  Find out what makes each kid tick.  Put out sparks before they become fires.  Teach.  Teach along the way.  And pay close attention:  if you didn’t already attempt the student project yourself, then you should be sued for malpractice.

And really, if you’re still didactically preaching along from the pulpit on most days, you’ll likely not even run into this little snag.  I bet this job looks easy from behind a podium.