Once again, blame him

This certainly isn’t the first time I’ve pointed toward Michael Doyle’s blog. But if you’re a new reader, and you have yet to visit his place, you can at least thank me for that much today. In reality, the rest of this post is essentially a response to Doyle’s post, “Just because…” from this morning. There, go read it. Go read it and come right back please. Save his site and spend those three hours trolling through all of the goodness he has there for later. Doing so right now will almost certainly throw you off task. What are you waiting for? GO. 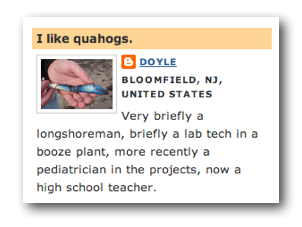 Remember, this train of thought response to Doyle’s post won’t likely make a great deal of sense on its own. You are hereby warned:

“I really like how Gary Stager refers to the way science is often taught as being more or less… Science Appreciation. He’s right.

I’d say much of my “teasing out the nature of science” occurred during the six years I was crawling around knee deep in the hanging prairies of the Loess Hills landform in NW Missouri and SW Iowa. There is something very crucial to being able to “get inside” a scientific endeavor, and really bruise your knuckles on the nuts and bolts of it. It is perhaps the only way to learn the layers of complexity in this way of “knowing” the world. 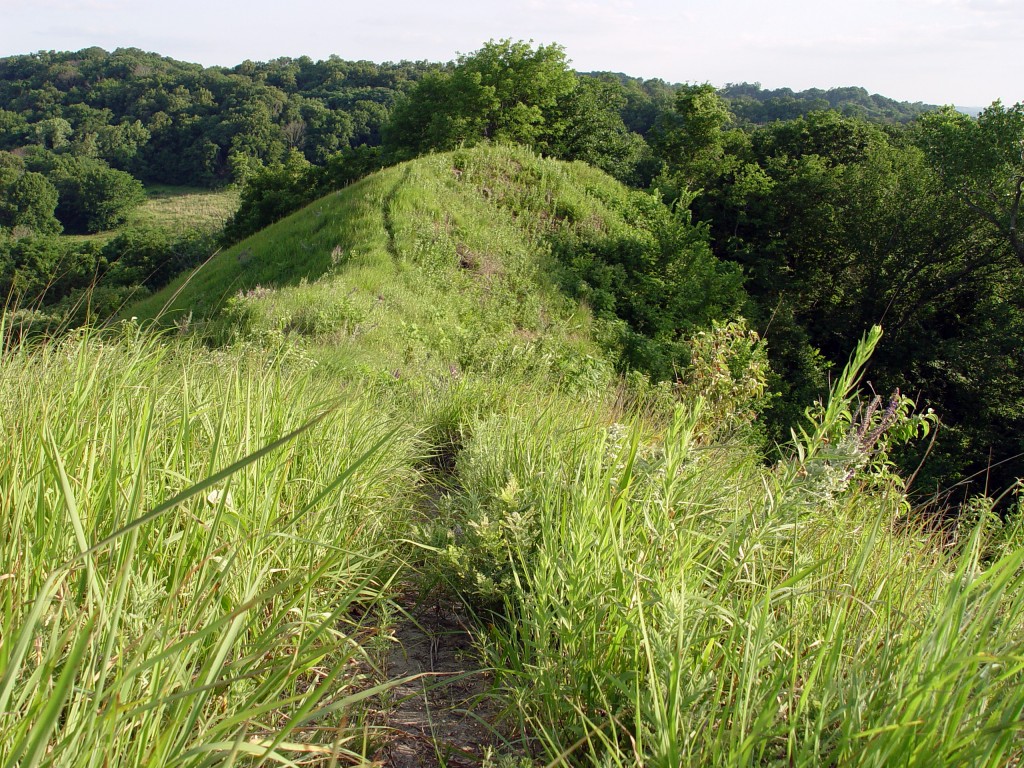 A look across a Loess Hills ridge in the extreme southern part of the range in Missouri. These hills become less forested as you move north into Iowa.

When I needed to classify and assign a latin name to everything green on a mid-grass prairie undergoing secondary succession, when I had to come to terms with the subtle mathematical ways of describing how the distribution of each species relates to the total ecosystem, when I had to figure out how I was going to then convert all of this data to warm, acceptable, humanspeak, when that humanspeak was going to happen in public and be picked apart by far wiser and more experienced peers, then… I suppose I had to come to some sort of soaked-into-the-cells understanding of the affordances and limitations of science in being able to describe what was happening on my prairie.

This takes gobs of time, and there is most certainly no app for that. As science teachers, even the best among us attempt to package up little experiences that allow for every element of the above. But there’s just something about time in this case. Perhaps it’s the weeks of thinking and reflection in between any of the “doing” that makes it a deeper experience.

I can realistically tell you this, the only students who have left me with a deep understanding of science, were students in a course we called Science Investigations. This course was from one to three years in duration and really sought to bring a true authenticity to the student experience. From the development of an authentic, self-designed (with coaching, of course) study, to the defense of said study to university professors… these kids did it all. I only had 10 to 18 students any given year, and there is truly no way I could have coached any more than that at any given time. My recollection of those days are memories of some of the best work I’ve ever done.

I say all of that because each year I also had another hundred or so students in Zoology, Botany, Ecology, Dual-Credit Biology, etc., who ultimately left us knowing quite a lot about the natural world. That might sound really great to the uninitiated, but I’m certain you see the distinction. Sure, many of those students were inspired enough to go off and become far more accomplished scientists than I ever was. But they didn’t really learn to be scientists from me. Perhaps they were ripe for this sort of learning when they arrived at the clock tower, but it was there they actually put the pieces together.

I don’t know… we require students to work deeply through the writing process from beginning to end don’t we? Don’t we expect them to be able to write independently and effectively when they leave us? (don’t get me wrong, I’m a writing-across-the-curriculum guy) But show me where we expect a similar efficacy in the processes and performance of science. We don’t. We just expect them to “*know a bunch of stuff.” Sure, we examine elements of the process, but only in chunks. Learning to write only in chunks leaves you quite short of that as well. In my opinion, it is worth getting upset about because changing this systemwide approach really wouldn’t require magic. It would just require a rearrangement of national and state priorities. Good luck, eh? 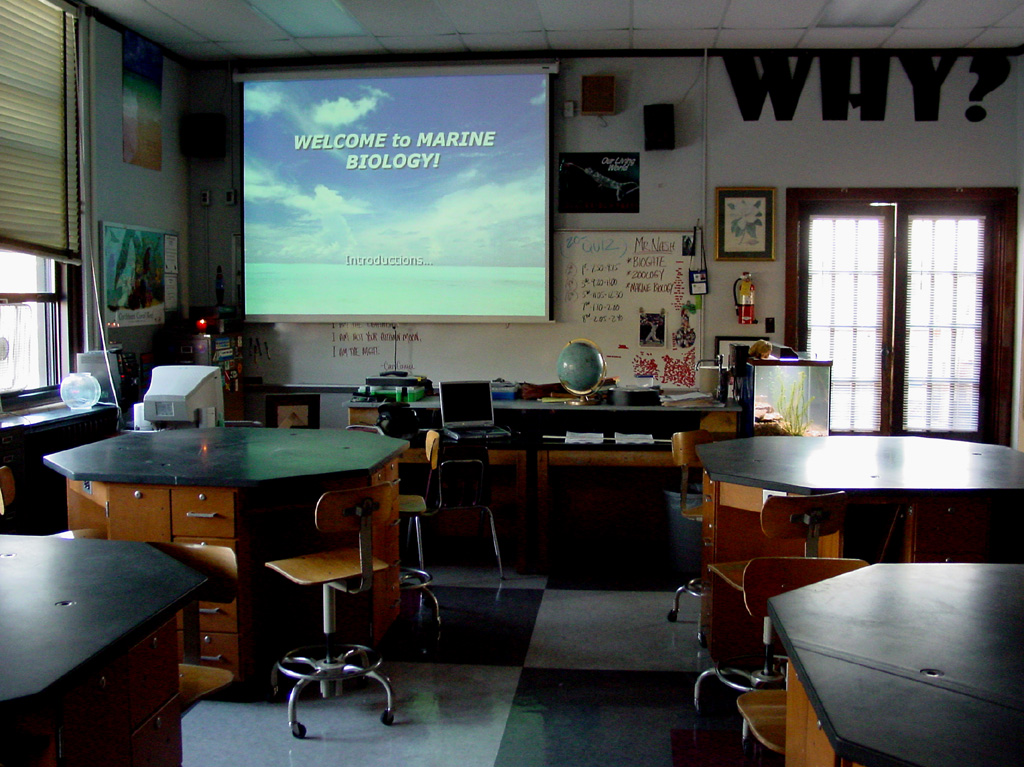 My classroom on the first night of class, August of 2003. Notice the sign in the upper-right. I might reconsider if I could go back now.

Back to the “sign wars” in your department… and your giant “WHY?” sign in the classroom. This might be one of those great minds think alike moments. Maybe curious minds is a better word. I had those four poster-board-sized characters on my wall from about 1993, on. Although, you’ll see that I, instead, used an overhead projector. Hey, I’m a font nerd. In practice, I tended to point in that direction as a “why do you say that?” in order to encourage students to provide reasoning for their claims. It was also a huge nod to the realm of wonder.

If I still had that classroom, I really think I might go in this weekend to change it from WHY? to HOW? I think your colleague is right on that one. How likely is the better word here. Although, there is also beauty in tapping into the why at the edges of what we study… even in biology class. You don’t have to be a card-carrying reverend, or the like, to at least point in another direction.

Sure, science is known by many for a set of processes it often includes. And yet, it is also truly a way of knowing. It certainly has limitations as that, but hey, so does religion, etc. Knowing a little about those limitations, and perhaps even hammering out a SCIENCE/SPIRITUALITY venn diagram on week one of class might be good.

You’re making me think too much (or at least report on such thinking) for a Saturday morning. Way to go.”

How do you tell the difference between commenting on someone’s blog and actually attempting to hijack it? I’m not completely sure, but I bet it looks something like this:

I blogged here pretty regularly in ’08 and ’09 when I was in the classroom more. As my role has changed over the past few years, somehow that frequency died back a bit. I suppose it is easier to comment elsewhere than attempt to relocate your own “voice.” The above screen capture was the result of trying to respond to Doyle’s blog with about 2X the character count of his original post. I’m glad I was checked on this one. Sheeesh. What a blog hog.

In the end, this little reflection took me back to the roots of how I learned to be a biologist… why perhaps I was able to foster the same in a percentage of students each year… and why curriculum and philosophy matters so much when trying to help students develop a true understanding of the world in which they live.