“It teaches the strong to know when they are weak and the brave to face themselves when they are afraid. To be proud and unbowed in defeat yet humble and gentle in victory. And to master ourselves before we attempt to master others. And to learn to laugh, yet never forget how to weep. And to give the predominance of courage over timidity.”

~General Douglas MacArthur, on the virtues of competitive athletics.

Reflections
Yesterday, the 2011 Missouri State Wrestling Championships concluded with the toughest battles of the year for many young men (and a handful of young women). Driving back across the state after the conclusion of a season is always a time of deep reflection and introspection for me. This year might have been a bit more intense. I competed in the sport of wrestling from the time I was ten. Ten years after that I began a coaching career that lasted for another twenty. Though I walked away from coaching two years ago, my younger brother stayed on to finish out these last two years. A first cousin of ours completed his career yesterday. He does not intend to pursue the sport in college. I’ve hardly missed a meet these past two years, but yesterday finally felt like a very real conclusion for me. 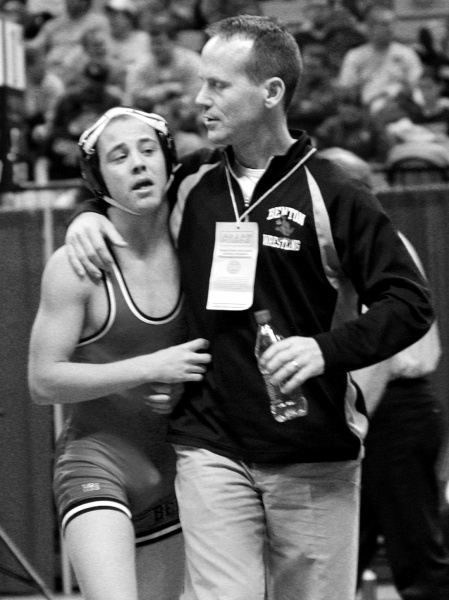 Cousin Bryson Dixon and I at the 2008 State Championships

Win or lose, when one of the boys in my family concludes a wrestling career, it is a curiously emotional thing. It is ingrained into the fabric of my family’s culture. I’m sure you’d have to be in it to get it, but I spent the better part of an evening in silence yesterday taking apart just why my family once again engaged in a festival of teary eyed embraces after Bryson’s last match. I’ve competed in many other sports throughout my life, but none dug into my psyche like that one. None of the others shaped my life quite like it.

Lessons
My involvement in wrestling as a competitor and a coach these past thirty years may have taught me more real lessons about learning and life than anything else I have done. Here are a few of the things I know as a result…

Two years ago I made the decision to move away from wrestling and toward helping my district wrap our collective heads around the purposeful embrace of technology in the classroom. I’ll probably second guess that decision as long as I breathe.

I was careful to leave that team in better hands than when I found it myself. It was important to me to replace myself well before leaving. I feel like I did that, and now…  now it’s time to focus my energy surplus and continue to apply those lessons learned to every aspect of the future.

A final thought
There’s a reason your community might tend to vote for athletic initiatives in lieu of those of a more academic nature. While it is easy to poo-poo that away as a distaste for “education,” it might indicate something else. It might just indicate a willingness to support those things that are real. To be clear, not everyone’s experience with athletics is a rosy memory. However, if our academic pursuits were allowed to take aim at things beyond artificial exams and grade point averages, we might just move closer to where we’d like to be. If all learning were as real… if our focus were on creating real things and tackling real goals, then the inner struggle of hours upon hours of practice might seem worth it.

Think about those academic programs that are well-supported by your wider community. What might those have in common with extracurriculars? Perhaps I’m wrong. Maybe I’m just a gym rat in need of a few push-ups.