This band had a few airplay successes prior to becoming an educational boon for children far and wide.  Moreover, if you teach science or math to little ones, you owe yourself a catch-up weekend with these guys.  Delaney, our three year old, is a huge fan.  She’d tell you so, but you’d probably rather hear her sing.  Her all-time favorites:  Cells, The Bloodmobile, Photosynthesis, Science Is Real, Meet The Elements, Electric Car, Number Two, and Roy G. Biv.  There are many more she’s loved in the past couple of years, but really…  wouldn’t it be cool if a group this edgy would have something like  -oh, I don’t know-  a wiki to organize all of this awesomeness?  Yep-  you guessed it:  This Might Be a Wiki.  Dig it.

So today I’d like to highlight an amazing band, a slick iPhone application, and a bit of the early-childhood learning fallout resulting from a clash of the two.

Today while Mommy was away, Delaney sat upon my lap for about an hour floating fingers through digital space…  spilling paint ala Jackson Pollock (one of my faves), all in the name of science influenced by TMBG.  As I sat in my chair piddling about with a new app, Delaney quickly came up to sit on my lap.  She’s used to occasionally plunking about with learning apps on Erin’s phone, but rarely gets that chance on mine.  Today, she watched me scribble about for something like 20 seconds before wanting to “…do it Daddy…  can I pwease?”  What do you think I said? 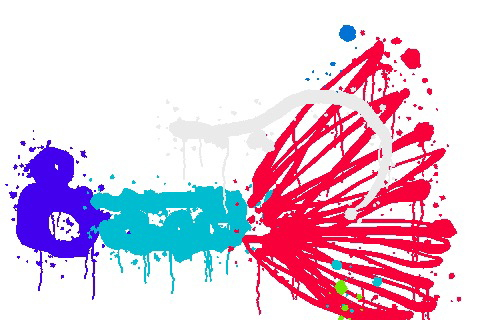 Can you guess where my mind is in Midwestern March after 1) a very long and precipitous winter, and 2) flailing out the above image?  It is here that I have to warn you: the remainder of this post may contain mushy dadspeak.  If you can’t hang, bail now.

Delaney quickly said…  can I do it?  After a shake of the phone, and a clear of the screen. I asked her what color she wanted to use.  She promptly chose bwack… and after a circumnavigation of the screen with her sweet little finger, she starter chattering quasi-intelligibly about cells.  “What did you say?  What is that?  “It’s a cell Daddy…  cells are inside of all of us, it’s a blood cell.”  I had heard that much before.  But from there it got a bit more fun… 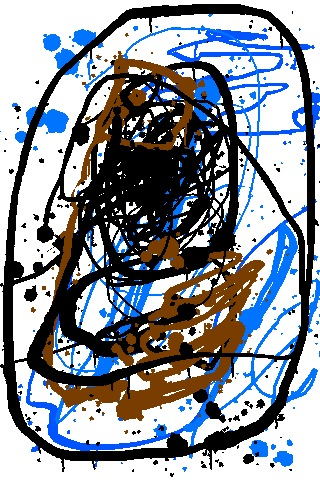 From there she whipped out an interior circle of sorts which she called the “nutrients” (smart me quickly realized this to be the nucleus) that “…has DNA in it.”  Now, a biology-teacher dad like me might be completely freaked out at this point if he hadn’t known of his daughter’s exploits with the TMBG songs and videos residing in Mommy’s iTunes closet.

She went on to tell me that, “DNA makes brown hair… and eyes… and boys and girls.”  If I wasn’t already in love with this little lap critter as my own little girl, I would have soon been hooked.

Who says this sort of thing when three?  As an instructional coach, I pay a great a great deal of attention to academic background knowledge.  Setting aside for a moment my deep beliefs in a rather constructivist approach to learning, we all know the benefit of children beginning any new learning with a prior set of relevant experiences…  or at the very least some of the vocabulary that goes with it.  How does Freshman biology change when these basics roll of the tongue like Schoolhouse Rock did for me? 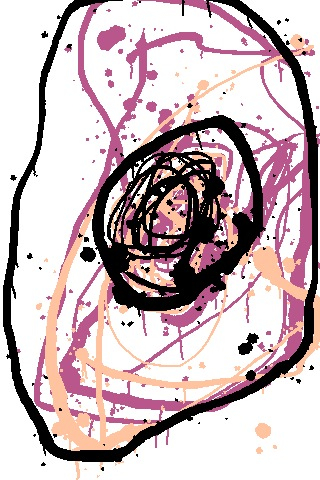 This cool little app allowed her to select new colors with the flick of a tiny finger.  I pointed out which buttons did what, and she quickly drank it in like it was the tricky block atop the Lego tower.  She then cranked out a few more cells and ended with, “Daddy, it’s your turn… you do it,” as a plea for modeling some fun.  What did I do?  Not much more than what she had already done.  It’s a bit tough trying to squeeze in a mitochondria with big kid fingertips.  All I did was to ask questions along the way.  I asked if she would tell me what I needed to do next.  I let her run the show.  I tried to roll with what she already thought was important.  She’s three.  Not fourteen. 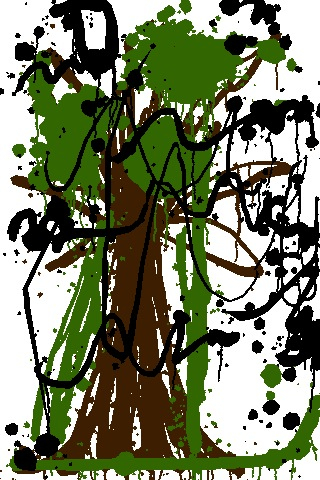 After tiring of cells, she wanted to make ” a tree.”  She shook the phone to get a blank white slate, and then begged me to “draw too.”  She implored me to begin and I quickly drew in the brown trunk and branches.  After grabbing it away, the rest was all her.  Of course the tree needed “green leaves” and a line of “grass” beneath, and then a flock of “birds” above.  The black scribbles of birds in the image above are the birds in “the rainforest.”  Birds and coyotes… in the rainforest.  Who knew?

It all came flooding in to me as I remembered the lyrics regarding cells, the bloodmobile, etc…  I sat in my chair with my girlie atop my lap, piloting my little phone through her rich imagination.  A post with all of her descriptions would fill this page.  I won’t do that to you.  What I will do is ask you to think about the efficacy of a touchscreen in the hands of a toddler.  Full disclosure:  I love paper.  I adore the smell of crayons.  I love sitting down at the table with her and having her pick out colors for me and bossing me around the page, telling me what to color next.  I do not think it is a good idea to passively babysit kids with electronics, or anything else for that matter.  Just because they take to it like a fish to water…  doesn’t mean that it is necessarily a good thing.

For me though, herein lies the difference in today’s experience:  it wasn’t anything close to passive.  The size of this device allowed her to be fully seated within my arms and legs for some serious one on one time.  Close is good.  After all we are humans, not computers.  We were snuggled up.  We were storytelling.  We could get away with whispering.  So I’m reflecting on the synthesis of a touchscreen loosely emulating the style of Jackson Pollock, the musical genius of They Might Be Giants, and playtime that involves close physical touch with Dad.  The fun of all of this spilled out upon my lap this dark, rainy day in March.  When does a silly phone become a handheld learning tool… a creative tool… a play toy?  Think about that.  This was fun.