I will never forget my second year as a teacher when a student asked:  “Who is George Brett?” …in reference to a signed photograph on my wall.  So, mark 1992 as the first time I was blown away by the fact that my students were in some ways “not from my world.”  At the time, just two years removed from his third of three batting titles, I thought I had just experienced a travesty of justice. I can drop a name here because I have cool kids who are quite open to learning.  So on Friday, when Chris asked, “where are the seeds in an orange?,” I was at first taken aback.  However, it didn’t take long to snap my brain back to the reality that today’s students do not come equipped with our experiences.  For those of you who have yet to an experience such a moment:  it is coming.  Honestly, the sooner, the better.  Perhaps the biggest mistake we can make as educators is to assume that our students have background knowledge and experiences anywhere in the neighborhood of ours.

This post  -really-  could go anywhere from here.  However, it is late and today I choose to cut to the chase and deliver the succinct message.  Chris thought oranges didn’t contain seeds.  Chris -and a ton of the kids in that class- had never seen an orange (or any other citrus fruit for that matter) with seeds.  As much as I think I know-  this hit me upside the head.  He said never.  They said never.  It seems that the preponderance of seedless fruits has all but overtaken the market since I last checked.  Who knows-  perhaps I just haven’t noticed because I understand how plants are born.

So, though most of you reading this may be surprised, most Americans the age of our students are so distanced from the food they ingest, that it is:  you pick the astonished noun.

As a longtime instructor of a high school level botany class, I have seen this one coming.  Still, it smacked me in the face.  These were some of our best, brightest and most observant students, and they were clueless as to the origin of those orange-colored orbs of goodness.

This post is about detachment.  Though a detachment that has little to do with technology as it related to information and communications technology (of which I so often write).  This has more to do with botanical knowledge, selective breeding technology, and just technology of planet Earth combined.  The bottom line?  Our kids are distanced from the natural world we (most of us reading this) grew up in.  This is perhaps the first generation of children that are so distanced from the food they consume.  Our kids think their food comes from an aisle in the local HyVee…  or perhaps a Price Chopper. How do we fix this shortcoming?  Fellow science blogger (if I can lift myself to this level), Michael Doyle suggests this lesson plan that will likely never be delivered.  I agree.  However, it would likely do tons of good in the year 2008 for many many reasons.

I will never forget sitting in for an address by Richard Louv at the 2007 NSTA in St. Louis.  What is funny is that my wife (also a biology teacher) purchased a copy of Louv’s Last Child In the Woods earlier that same day without realizing it.  In this book, Louv proposes the idea of nature deficit disorder.  In extreme summary, Louv proposes that we are the first species that has raised its young almost totally dismissed from nature.  By this generation, at least.  Kids don’t venture outdoors.  Kids don’t play away from their parents.  Kids don’t know anyone…  or currently have relation that still farm…  anything.  His keynote that day can still be found on video here.

The quest for calories is equal to a walk down the aisle of the local grocery superstore.  The living organisms that gave their lives to nourish us are so far removed that we are clueless as to their connections to our daily lives.  For the first time, instead of battling through boredom by lying still beneath a neighborhood tree and staring up to watch the leaves blow in the wind, we plug up the Xbox and be-still their brains. 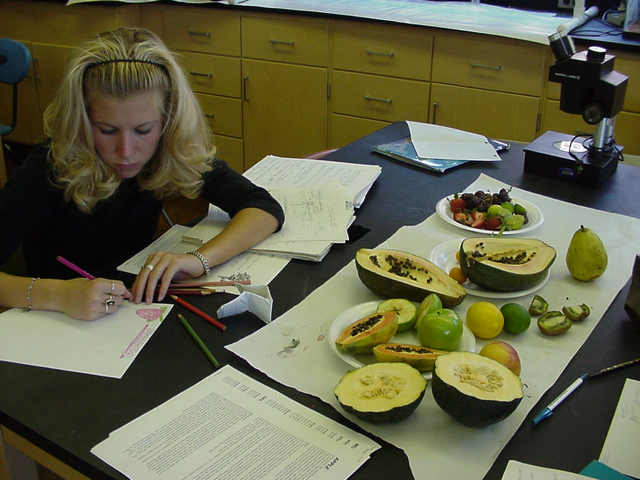 I am a huge proponent of technology as a positive force in the lives of our kids.  This, however, is a different story.  In teaching biochemistry and it’s relation to human nutrition in my Dual-Credit Biology class, I have learned where to focus the future springtime explorations into ecology.

Our kids are the leaders of our brave new world.  They are also the first who are so drastically distanced from the planet which nurtures us all, and are the ones who will make all future environmental decisions.

Our botany class did not “make” for the second year in a row due to an NCLB focus on “basics”.  My previous botany students are urban kids who at least get the basics.  What are the basics?  What should we teach?  Do we face a “brave new world” unprepared?  Yikes.  Where are the seeds in an orange?

And in a really odd conclusion… and to answer Dembo’s question…  Why do I blog? It is actually quite simple.  For synthesis.  I read things from talented and amazing people.  I work with amazing kids.  I have seen amazing things.  I put them together.  I blog.