A friend of mine who is an instructional coach at a local elementary school relayed a very telling little story to me today via e-mail. =>

She said that a friend’s first grade daughter, named Riley, was trolling through a pumpkin patch this past weekend…  and apparently, she eventually found one she liked but wanted to keep looking in case she found a better one, and she told her mother, “let’s bookmark this one.“

That was pretty funny to me the first time I read it.  Of course, after it settled into my brain a bit more, it became even more amazing.  This first grader gets it.  She understands the concept of why one would perform such a seemingly simple, yet terribly valuable task. 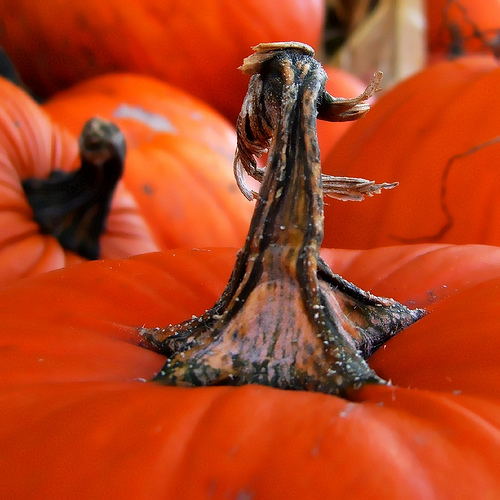 I suppose because this provides such powerful contrast to another recent conversation with a teacher who detailed for me how he helped explain the concept of bookmarking to his high school principal. (yes, garden variety bookmarking- not social bookmarking, as in Delicious, etc.)  So yes, just this past month, he walked this principal through the process of bookmarking sites within a web browser for the first time.

I frequently rail against the pigeonholing of folks by nearly age alone into Prensky’s (2001) “digital natives” and “digital immigrants.”  Kids certainly possess a much higher comfort level with technology, but their proficiency often seems grand only in the eyes of the technology illiterate.  I can certainly say that for the high school students I work with, few truly show characteristics of being truly “digital native.”  For this, and many other reasons, I really wish I’d stop seeing this term.  This weak differentiation can even be rather counterproductive at times.

However, my hatred of the phrase weakens a tiny bit hearing stories like this one-  not at all because this story makes it true, but because it does allow me to see where people might have generated this idea in the first place.

So how do you bookmark a pumpkin?…  I think I had just better contact little Riley for the tech specifics of that one.